Teaching the Clean Part 2 – From the Bottom Up

After teaching the PVC drills and the Muscle Clean from the top, I introduce the Pull from the floor. Eventually we will meet in the middle and put the entire lift together. I use this approach in our team workouts because, for coaches, time is a valuable commodity, and I want to accomplish plenty of teaching while still giving the athlete as much physical work as possible with as few exercises as possible. By working from both ends, I am accelerating the learning process and teaching the hip hinge (ultimately the RDL), bracing, and the pull from the floor. Because most of these athletes have a limited training background, they require less weight being moved to still be able to achieve a training effect. Although the focus is technique of movement, the athlete is still putting in actual physical work and developing strength, especially on the muscles of the posterior chain and the core. 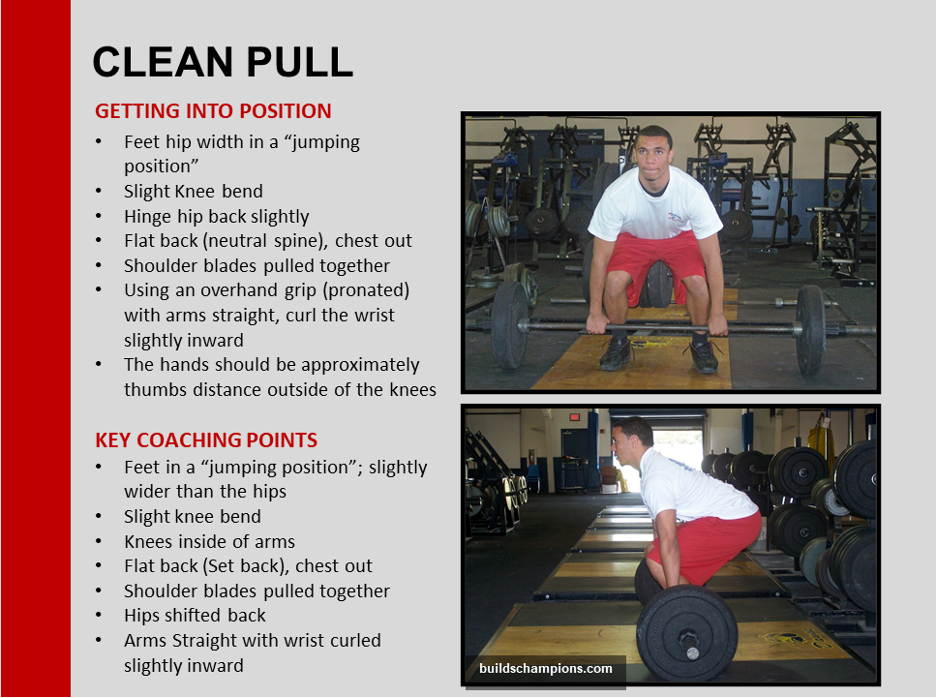 As described and pictured above, when getting into position to pull from the floor, the athlete should position their feet in a good athletic position of hip width or slightly wider and grip the floor with both feet in a tripod fashion. This means the athlete wants the ball of the foot/big toe, the heel, and the little toe of both feet securely gripping the floor. The described hand-grip width of a thumb’s distance outside the knees is a general starting point, as grip width will be adjusted according to the comfort of the athlete.

Having a good start position is the key to protecting the spine and setting the stage for efficient pulling mechanics throughout the movement. This determines bar acceleration and ultimately how much power is produced and thus the value of the lift in athletic development. An improper start position, such as a rounded back, increases the risk of injury to the lumbar spine and allows the bar to drift away from the body during the ascent, making the lift inefficient and the weight difficult to control as the bar ascends. Some common starting position body-alignment errors are: 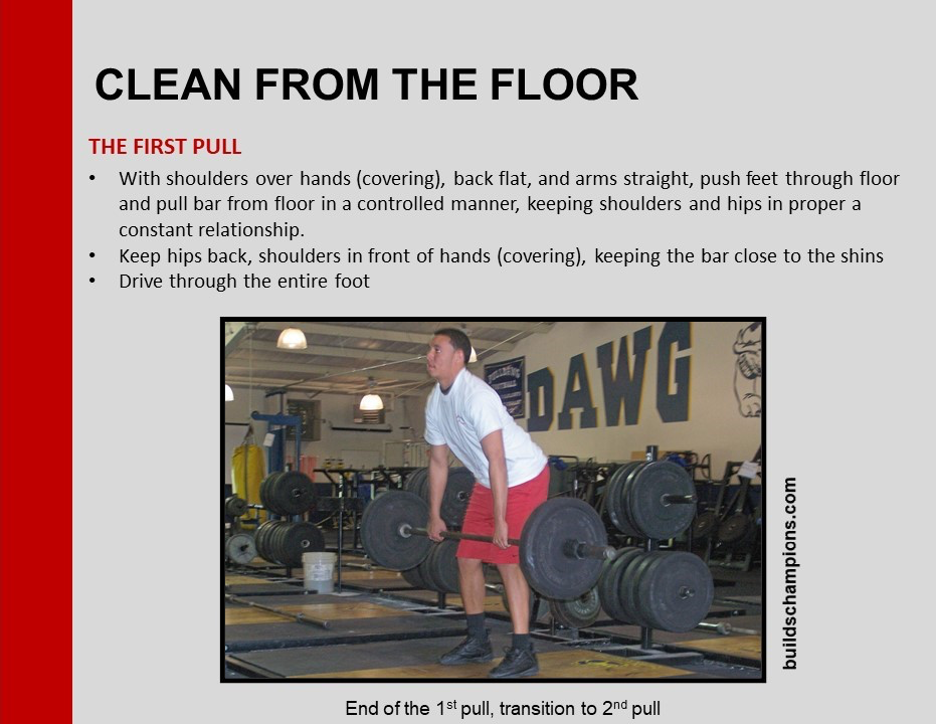 As the bar ascends upward and slightly back, the hips and shoulders should maintain a constant relationship, with the shoulders covering the hands and the back remaining flat and in the power angle through the first pull. At the end of the first pull, the bar should pass smoothly past the knees and back toward the thighs. 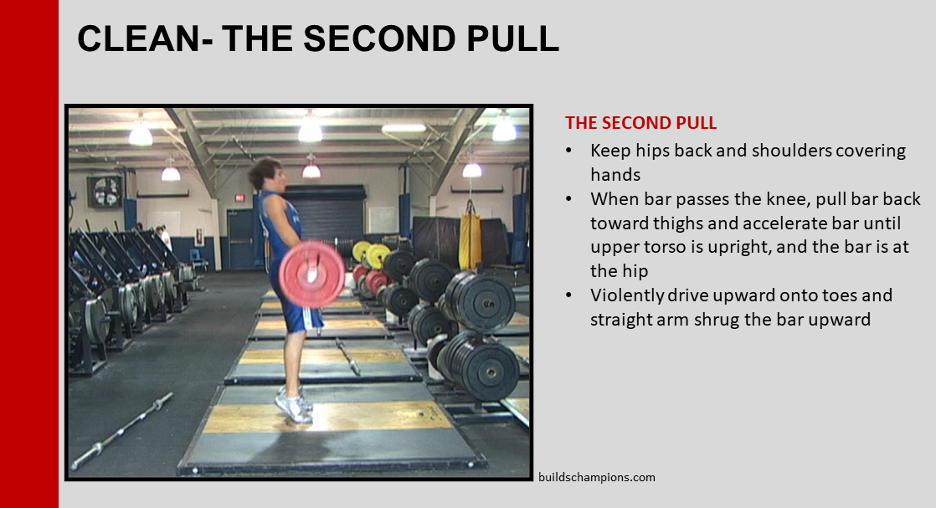 As the bar passes the knees, the athlete will continue to simultaneously extend the knees and the hips to accelerate the bar upward along and possibly brushing the thighs. At the top of the second pull, the athlete will violently finish by extending the knees and hips while shrugging the bar upward so the body is completely vertical in a slightly leaned-back position as shown above. The violent final knee/hip extension should propel the athlete off the ground vertically. The key coaching points from the starting position through the end of the second pull that deserve additional emphasis are:

A good exercise to reinforce a sound starting position and the mechanics of the first and second pull as well as building strength is the Clean Pull shown in the link below.

Some refer to this as the Clean Deadlift, but to keep my terminology the same and easier for kids to remember and to think of it as a dynamic movement that is part of the Olympic family like the Clean, I call it the Clean Pull. Key coaching points to emphasize are:

These reinforce the movement patterns we want when we perform the complete Clean.

Back to the Top

After the athlete has a solid grasp of the principles and movement of the body position from the starting position, and from the first pull through the second pull, it is time to go back to the top and begin working down the thighs with partial movement drills.

I like to have the athlete begin with a Clean from the hip, which is a Muscle Clean with some pop added to it. These can be done from a rack, but I prefer the athlete to use training plates to keep the weight light but elevate the bar to the correct starting height from the floor. This allows the athlete to pull the bar from the floor to the hip at the start of each set to reinforce their starting position and pulling mechanics. 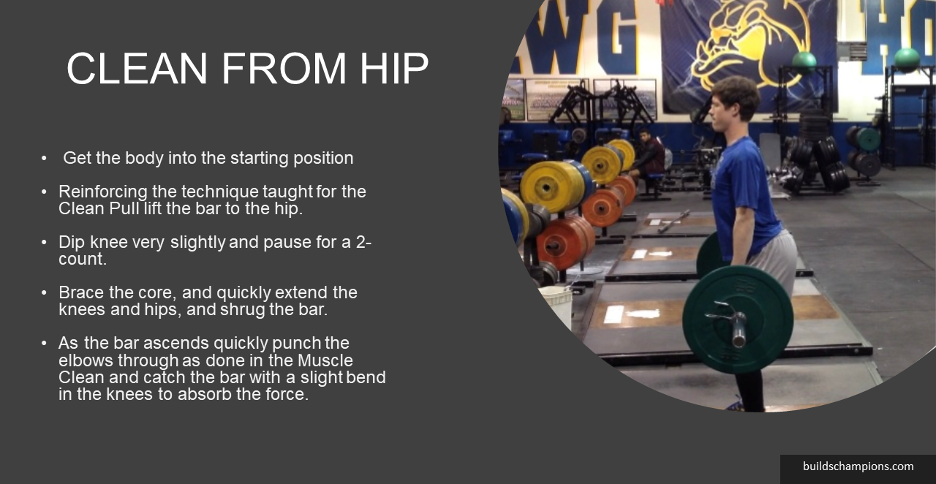 After the athlete is comfortable with the violent finish of the second pull from practicing the Clean from the hip, the next drill moves the bar position from the hip down the thighs to a point between the middle of the thigh and just above the knee. The exact location will be determined in part by the lever length (arms and legs) of the lifter in question. By continuing to start from the floor, the athlete is again performing additional reps from the starting position and pulling through the first and second pull, thus reinforcing the primary movement pattern. In the drill from mid-thigh, we add a hip hinge and a Romanian Deadlift (RDL) as the bar is lowered down the thighs to the new takeoff point. This reinforces the hip hinge mechanics while developing strength in the posterior chain even though there is not much load on the bar. 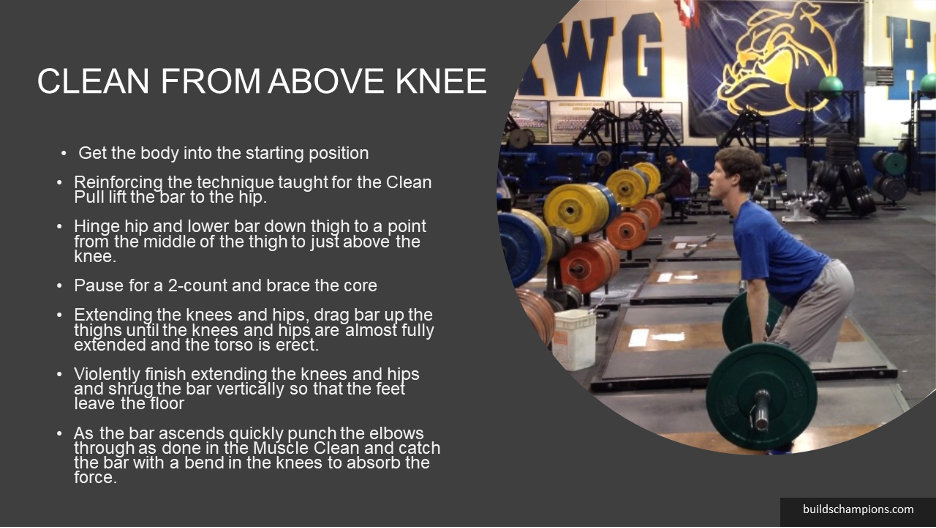 The next step in the progression is performed just as the Clean from the thigh drill, except as the athlete lowers the bar back down the legs, they will continue the RDL until the bar passes the knees and reaches the middle of the shin. 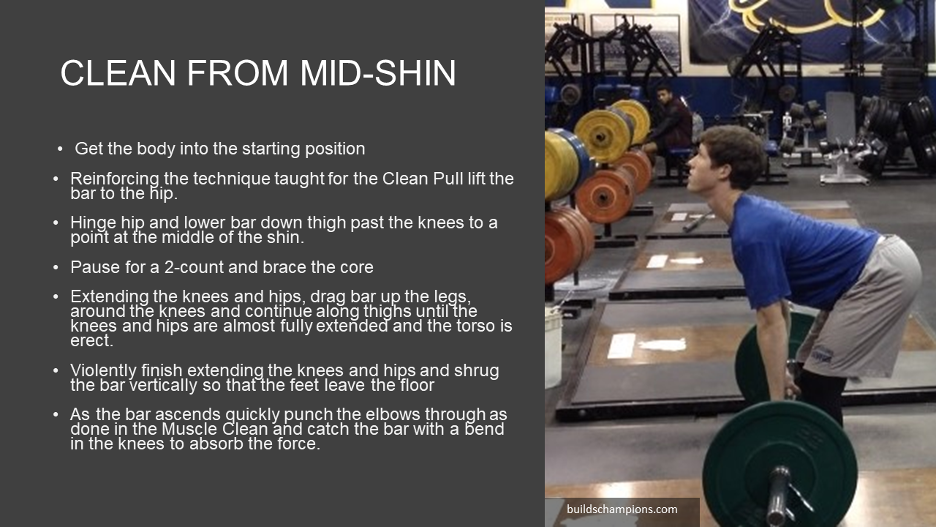 Once the athlete has a solid grasp of the three previous drills, they can be combined into one drill called the 3-Position Clean. The drill is performed in sets of three reps each with one rep being from each position. Below is a video demonstrating the 3-Position Clean drill (I cued the athlete in four positions; however, normally I only use three).

The focus of these drills is to develop the bar acceleration and increased force development necessary to maximize power production and speed at the end of the second pull from various locations in the first and second pull, as well as to mesh the lift from multiple individual pieces into one complete movement. 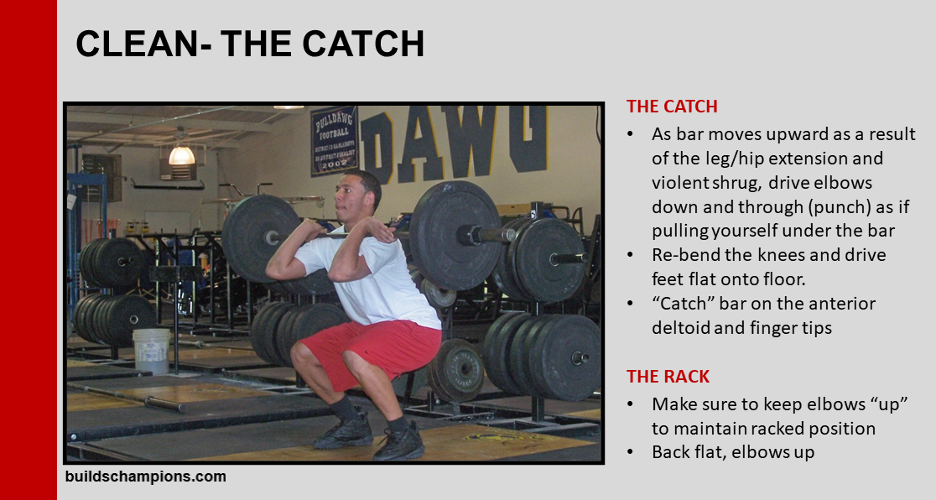 The catch is an extremely fast transition from the bar and the body travelling vertically from the violent leg/hip extension and shrug at the top of the second pull to the athlete pulling themselves back under the bar, re-bending the knees, and punching the elbows through to receive the bar in the catch position on the anterior deltoid and finger tips.

This rapid transition is best described and cued “fast up, fast down!” This cue was learned from another one of the people who influenced my coaching of the Olympic lifts, Jim Snyder. I met Jim while I was the Defensive Coordinator/Strength Coach at New Mexico Highlands University in the early 1990s. He was a science teacher at a local high school, and we took a couple of grad classes together. He competed in Olympic weightlifting in addition to coaching his daughter, who was a multiple-time Junior National Champion. Jim had originally been introduced to Olympic weightlifting while stationed with the Army in Germany before the fall of the Iron Curtain. During the off-season, a few lifters from Eastern Bloc countries who were among the best in the world trained at the club where Jim trained. They used this saying as a coaching cue. And that is it in a nutshell; explode vertically, and then before the bar stops its ascent, quickly pull yourself underneath and catch it.

After securing the bar on the shoulders, make sure to keep the eyes looking straight and the elbows up. If the athlete’s eyes look down, their head will likely go down, which in turn pulls the entire body, including the elbows, down and forward. This can cause the athlete to dump the bar. A cue I use is, “Where the eyes go, the head goes, and the body follows.” Once secure, stand up fully and lower the bar with a controlled drop to the floor; re-set the bar and your body in a proper starting position and repeat the next rep.

My intent during this writing was to explain the teaching progression as it transitioned from the top-down to the bottom-up, eventually meeting in the middle. In Part 3 of this series, we will look at the Clean as a complete lift and examine some drills and corrective exercises that can be embedded into the team workout to improve technique while still creating a positive training effect in the process.