Until the summer of 2019, I did not use any specifically designed screening assessment with our athletes. I had read about the Functional Movement Screen (FMS) when it was first introduced but had not studied it closely. I had coached football, powerlifting, and track at the same school since 1999 and was responsible for the development and implementation of the strength and conditioning for all programs. We were a one high school town with two feeder junior highs. I had installed, assessed, and modified the strength program over several years and had instructed and trained our coaching staff from the junior high to high school on our program and the exercise teaching progressions. By 2003 I was blessed to have a great group of young coaches at the junior highs who had spent time in the weight room as athletes growing up. Several of these young coaches had grown up in our program and as such had a solid strength training foundation. Over the years many of those coaches were elevated to positions on the high school staff, giving me a solid group of weight room coaches from bottom to top.

Our coaches assessed any movement issues we identified in an athlete on an individual basis, and since a majority of our athletes started training with us in the 7th grade, most issues were identified and corrected prior to the kids promoting to the high school. In cases where we had a new student move in at the high school level, their position/sport coach was responsible for teaching and evaluating exercise technique. In the case they came across a movement flaw they could not correct, we worked together to fix the issue. At the high school alone we successfully and efficiently coached 220-240 athletes per year and 100+ of those athletes daily, 3-4 days per week.

In June 2018, after 19 years at the same school, as inevitably happens the administration chose to “go in a different direction” and our coaching staff moved on. I was hired at a 6A school as the Director of Strength and Conditioning working with all sports. I arrived in July and spent the first 5-6 weeks observing and evaluating the athletes’ movement and exercise technique. When you have been in the same place for almost 20 years and have an established program that runs like a finely tuned machine and then move somewhere new, let us just say it is a bit of culture shock. You are used to coaches and athletes using the same established exercise technique and terminology and now you are in a new place where the coaches and athletes do not know what you want it called or your technical expectations.

During my evaluation I observed several movement flaws and posture issues among the athletes. I visited with the athletic training staff, and they confirmed my concerns about chronic injuries that were consistent with what I was seeing in the athletes’ movement and posture. We started with the Level 1 workout with every sport except volleyball. The Level 1 program emphasizes body weight movements combined with teaching exercise technique for basic barbell and dumbbell exercises. Generalized corrective exercises were also included to address prevalent posture issues.

The volleyball athletes were already technically sound on most of the lifts we were installing, including Olympic variations, and primarily only needed some technique “fine tuning,” so I started them on the Level 2 program. Varsity and junior varsity football were in-season, so I only saw them twice per week for 30-45 minutes. Due to the limited teaching time with them, I kept their program basic (Level 1) with no Olympic movements until after the season. After football season I programmed the varsity and junior varsity on a modified Level 1 program with primary emphasis on technique and refinement of the core movements such as Clean variations, Squat variations, and Pulls. With all programs the exercise menu remained simple and consistent. Since I was coaching coaches as well as athletes on technique and the “why and how” of the program, nothing new was installed or progressed until most of the team members were fundamentally sound in their movements.

As the first year progressed every team—coaches and athletes—continued to improve in their understanding of exercise technique and what goals we wanted to accomplish with the various components of the program. When we began, the movement and posture issues were widespread enough that I chose to address them on a team level rather than an individual basis, as everyone needed some amount of correction.

My first year was spent focusing on the high school athletes, so I had no real interaction with the junior high athletes. My first opportunity to evaluate them came at our summer program in June 2019. It was at this point I realized we needed an assessment and screening process, and I immediately began researching and studying to develop one that would be best suited for our program. 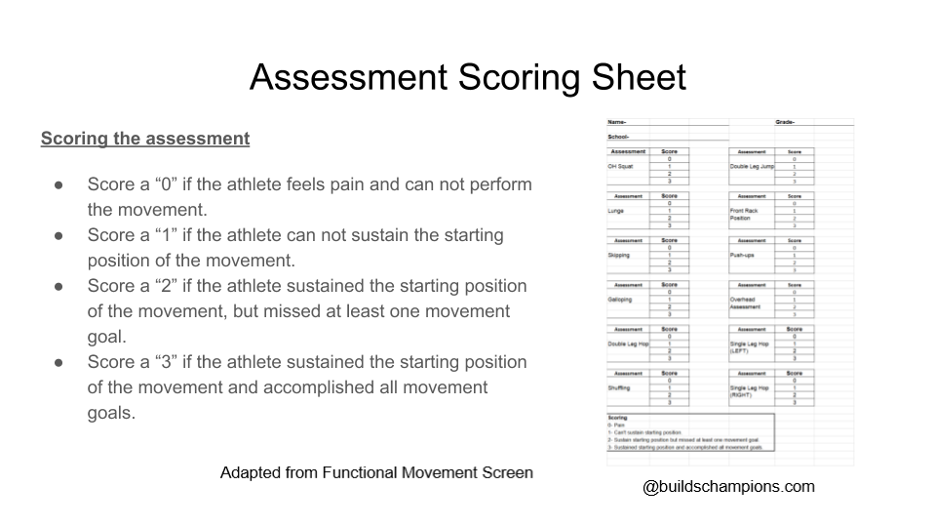 The implemented assessment program is comprised of components taken from the Functional Movement Screen (FMS) developed by Gray Cook and Lee Burton, the Overhead Squat assessment adapted from The System: Soviet Periodization Adapted for the American Strength Coach by Al Miller and Johnny Parker,as well as other locomotor skills that identify movement and mobility deficiencies in our athletes. 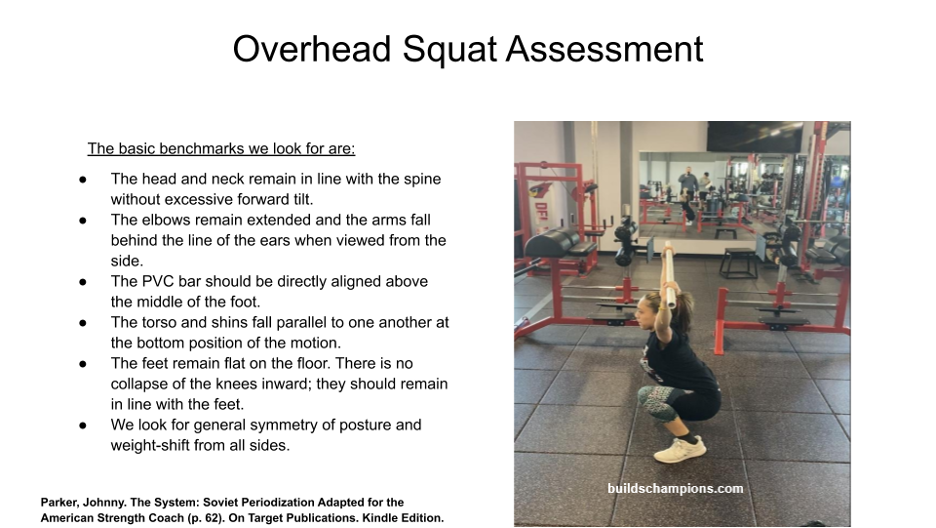 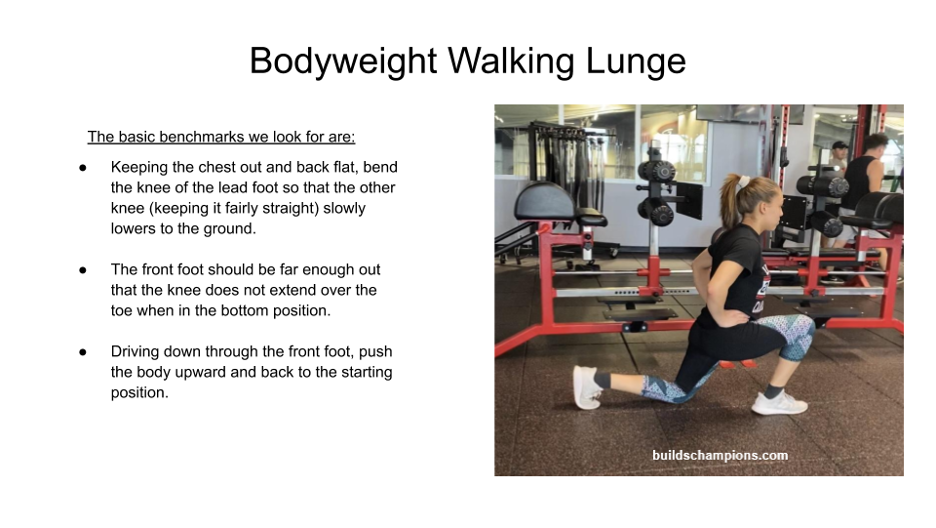 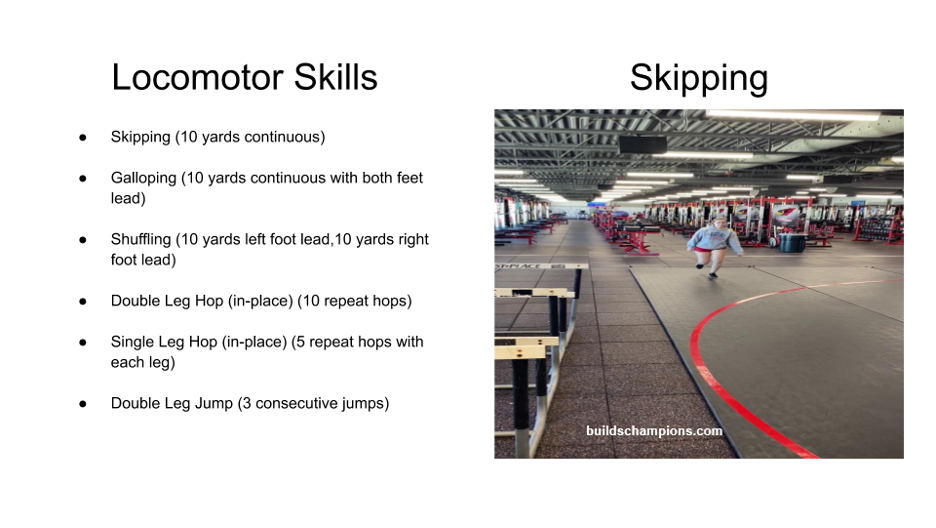 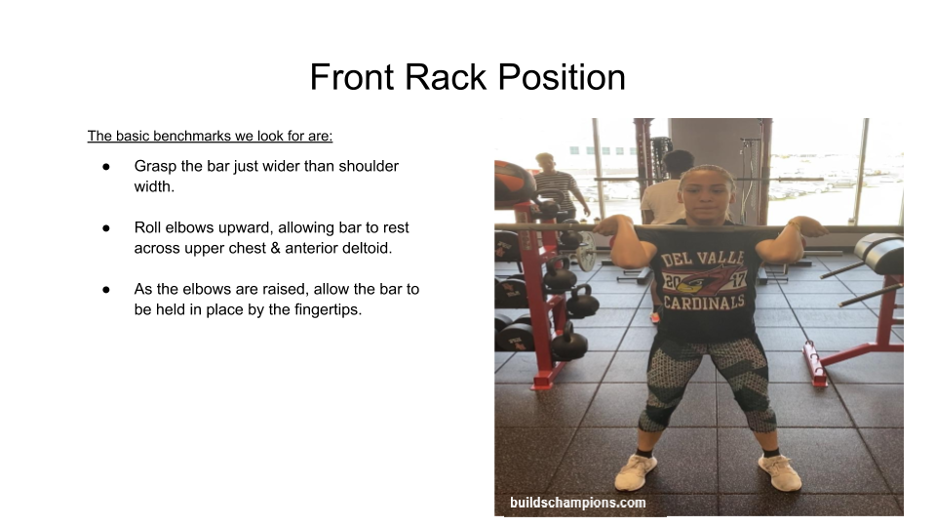 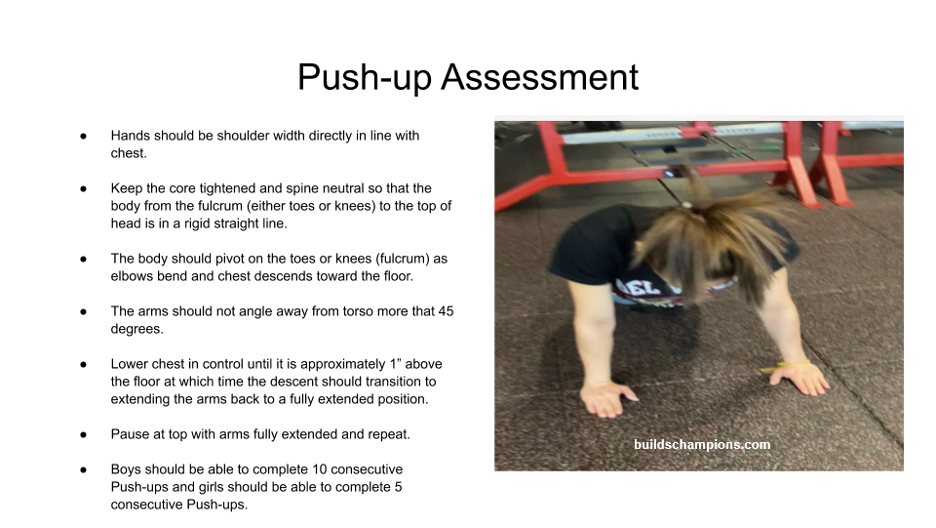 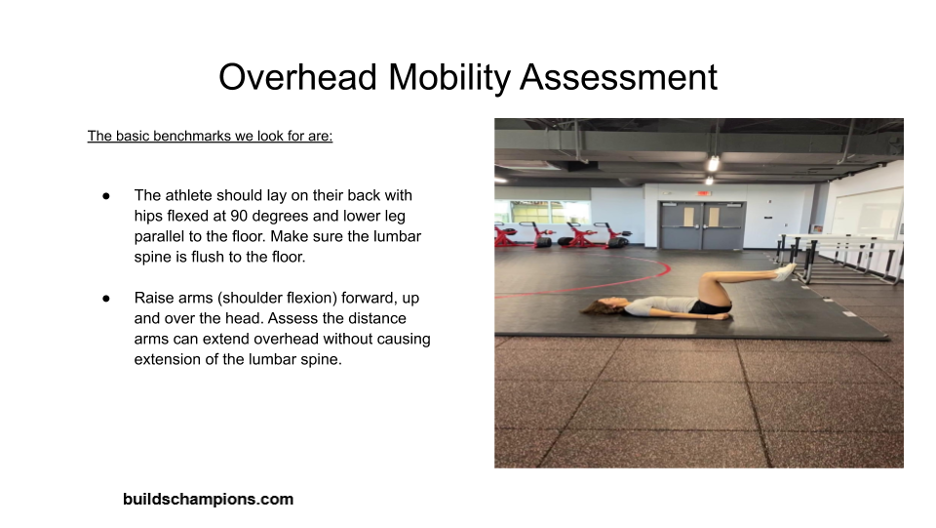 Many times, the deficiencies identified not only prevent performing safe and efficient movement but often prevent the athlete from aligning the body into the correct body position for various sport activities or strength training exercises. For this reason, the screening process is continually evaluated and modified as necessary to meet the ever-changing needs of our athletes.

In the next installment of this series, we will discuss common issues discovered through the assessment/screening process and the plan we follow to correct them with specific mobility and stability corrective exercises, and supplemental strength movements to aid in developing muscular balance, as well as looking at how our teaching progressions play a role in the process.